NEWS ALERT Our Response to COVID-19 Update - May 15 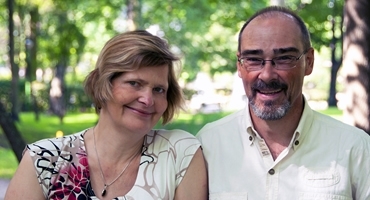 With a passion for discipleship and the development of leaders, we are committed to training interns, new and mature believers and engaging as many people as possible in the work of the ministry.

Don was born in Manitoba, and Betty hails from Terrace, BC. They met at a church in Edmonton a week after Don rededicated his life to Christ and to lifelong ministry. Don was ushering and Betty was lost – the rest is history! A year after being married, they moved to Regina to attend Canadian Bible College. Both of their children were born there, and after five years, they moved to Biggar, SK to plant a church before heading to Poland in 1998.

Betty comes from a Christian family and grew up in British Columbia. She became a Christian at an early age, studied psychiatric nursing and then moved to Edmonton to attain her registered nursing training. It was at that point when she met Don. Don accepted Christ at the age of thirteen after his family broke up and moved to Leduc, Alberta, where they began attending an Alliance church plant. He has attended the Alliance ever since.

Don and Betty both sensed a call to missions prior to meeting one another. That common passion continued, and while attending CBC, they responded to a presentation made at the beginning of the C&MA’s launch into Eastern Europe and Russia.

Don and Betty served in Poland for many years, working with the national church, encouraging church planting, leadership development and church health. They now have a passion for reaching a displaced people group in the Silk Road Region with the good news of Jesus Christ. They will be relocating to the region and assisting a local church, labouring together with them to glorify God by developing a culturally relevant, indigenous movement of reproducing kingdom communities amongst the people.

If you would like to sign up for their weekly newsletter, email Don and Betty at [email protected].

Subscribe to receive email updates with the latest news.